The Knife of Never Letting Go

The Knife of Never Letting Go by Patrick Ness


Todd Hewitt is the only boy in a world of men. All the women, including his mother, were wiped out by a virus just after he was born. The virus also meant that men could hear each other's thoughts. And it means that animals can speak.
One day, after coming back from the swamp, his guardians make him leave, for his own safety. Todd has no idea why. But then he meets Viola, a girl, and realises that maybe not everything he'd been told was true.

'The knife of never letting go' was very hard to get into, but once I did, it was great. I liked the way Todd found out more about his life as he went through. Some of the things in it are a bit scary, but apart from that it was a pretty good book.

When Albert's father buys a foal, called Joey, at the market, Albert promises to look after him. Soon they become great friends. But then world war 1 starts and Joey is sold to the Army. Will they ever see each other again?

This was one of the BEST plays I have ever seen. I loved the puppets ( for the horses ) and my favourite horse was Joey. One of the things I thought was clever was, whenever anything important was going on, most of the actors on stage froze, except for the characters involved in that bit. My favourite character was the goose puppet as it was really funny. 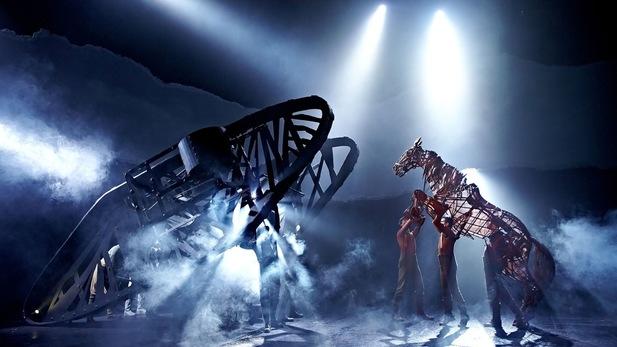 The Power of Five, Raven's Gate

The Power of Five, Raven's Gate by Anthony Horowitz
(first in the power of five series)


Matt is an orphan. His parents died in a car crash when he was 8. Somehow, he knew it was going to happen. He goes to live with his aunt but get's caught in a robbery and is given an option, go to prison or live in a foster home. Of course, he chooses the foster home, but things soon go wrong...

Firstly, I am going to apologize for not posting anything last week, I was in a house with no wifi : - $.

Now, onto the review.
I thought that this was a bit scary, an opinion shared by many of my friends, who stopped at this book because it was to scary. It was definitely the best book in the series. I thought the plot was well thought out and I really liked the characters.

Apple And Rain by Sarah Crossen


Apple lives with her grandma, her dad has a new wife, who she absolutely hates and her best and only friend has just ended there friendship. All in all, things aren't going too well for Apple. She thinks things will be better when her mum comes back. But when she does, things don't quite go to plan. For a start, she has a new sister...

I think that this book was amazing and, even though it was written in third person, you could really feel what Apple was feeling and see what she was seeing. I loved the end (although I'm NOT going to spoil it!) and it bought a tear to my eye. 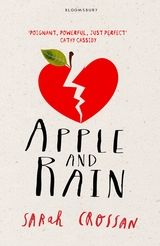 Tell Me No Lies

Tell Me No Lies by Malorie Blackman

Gemma's hobby is cutting up newspapers, keeping headlines in her scrapbooks. But she only keeps yhe ones with mum's on.

Mike is the new boy at Gemma's school, and he has a dark secret.

Gemma thinks she's seen him before, but can't remember were from. And then she realises.

I thought that this book was all right but not one of Malorie Blackman's finest. I thought the story line was a bit meh. Having said that, I thought the characters fitted the story really well ( if that makes any sense whatsoever...)

Tom dad has died. He killed himself, or at least that's what Tom's been told. But he's suspicious, the detective in charge of the case wants to know exactly what he's up to, all the time.

Hope or the livelifewithhope girl has lived next to Tom since forever but they haven't spoken in the last 5 years. But when her Dad asks her to keep an eye on Tom, she does it.

Leata (not a person, a drug) is legal drug that spreads positivity. But Tom and Hope think it has some negative secrets.

Together, they try to work out these mysteries, but can they do it before they end up like Tom's dad?Dead.

When I picked up this book, it looked really good. Unfortunately, I soon got confused. It was hard to work out what had just happened i.e. s/he was on that side and now s/he's on this side! And so on and so forth. Also, there was a bit of love story, sort of. If it was meant to be a love story, which it may well have, it needed to be clearer.